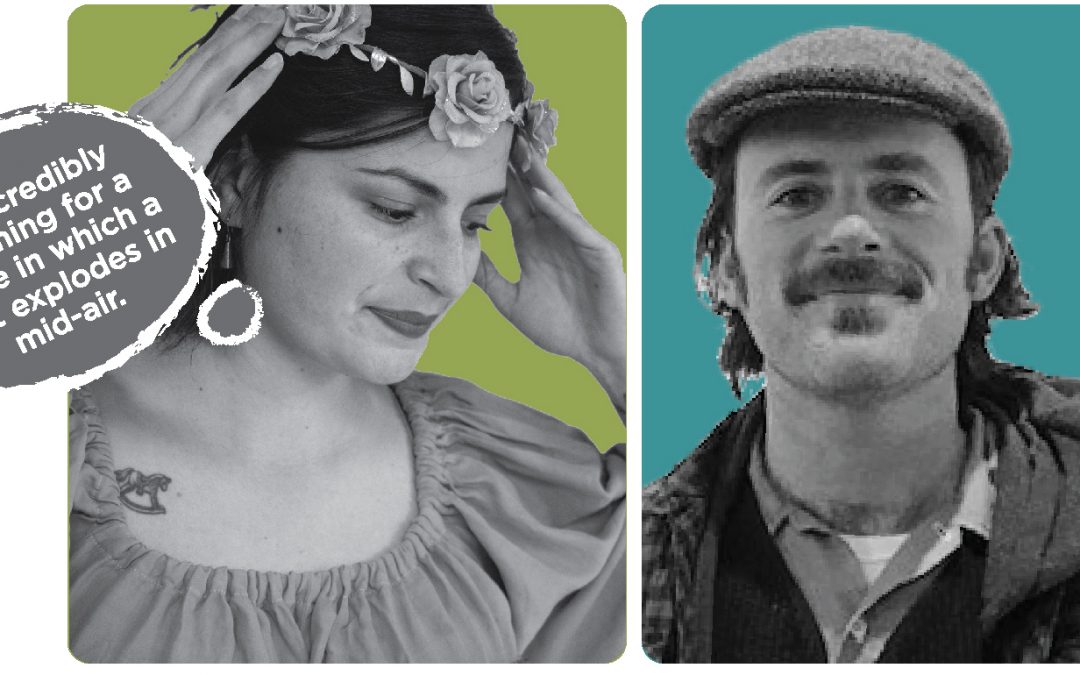 Jack Lorang: I went to Europe earlier this spring and was supposed to spend almost two weeks in Ireland. This was just as the travel bans started and I made the tough decision to return home early, skipping the Irish leg of my journey. So, I was glad to have the chance to experience a bit of The Old Country by way of this warm-hearted movie. Trying not to be stereotypical, I noticed a certain charming quality in the two main characters. And I found it difficult, as a lamentably unworldly American, to separate this sense of charm from what I perceive as their Irishness.

Jazzmine Freedom: First, I’m sorry your trip was cut short. Next, I feel like I should own up immediately to being a fellow “lamentably unworldly American,” and so yes – I hear you about the Irishness of the movie.

JL: I also feel that the director may have played-up this aspect as a point of national identity by way of clever word play and the subject matter of the occult. Do you think I’m just noticing my own assumptions about what it means for something to be Irish, or is this movie a celebration of that very thing?

JF: I feel like sense of place was a big part of this movie in an intentional way. Ireland, yes, but also the ruralness. For me a key part of both the movie and your question about its Irishness has to do with charm. It’s incredibly charming for a movie in which a goat explodes in mid-air. Maeve Higgins was incredibly charming as Rose – is that separable from what I perceive as her Irishness for me as a viewer? I really can’t say. Is the visual charm of a toaster cord waving “hello” separable from my idea of the Irishness of the movie?

JL: Thank you for reminding me of the exploding goat…and the animate toaster. I believe the film makers used a self-consciousness of certain international assumptions about Ireland to both celebrate a unique cultural heritage and also poke fun at some of those more crudely reductionist assumptions. I think this is shown by the villain character, Christian Winter (Will Forte). He is a “successful” musician, coming from elsewhere (the U.S. I assume) riding on the fame of his only big hit Cosmic Woman. He purchases a castle in the countryside, lives there with his gold-digging girlfriend [Claudia O’Doherty], and enlists the power of black magic in attempts to create his next hit album. Christian and Claudia both seem to parody this outsider’s perspective on an Irish countryside that the main characters show to be more authentic, warm, and, yes, charming.

JF: Ok, yeah, definitely see what you mean about Christian and Claudia. What did you think of Will Forte in this movie? I felt like his being over-the-top worked here. I think this is because of what you’re saying about the characters of Christian and Claudia being intentionally one-dimensional, and how their ridiculousness is balanced by Rose and Martin being so down to earth and natural.

JL: I think Will Forte does a good job playing the comedic villain. To be honest, I’m realizing that I rarely evaluate comedic acting in a thoughtful way, unless its either really annoying or side-splittingly funny (I hardly ever have my sides split). I don’t think his performance was either of those, though I did find myself sympathizing with his frustration in achieving his nefarious ends. This is probably because I am a mediocre musician with a superficial interest in Ireland, Ha! And then there’s this aspect of virginity, which facilitates some final twisting of the plot in the climax of the action. Along with the hilarity of the scene, where Martin deflowers Rose to keep her from the ravages of hell, this issue of virginity/innocence seems to lie at the crux of the story.

JF: As far as the virginity stuff goes, I thought the switcheroo at the end was clever. It makes good use of Rose’s character without making fun of her – how she calls sex “getting giddy” (which is frankly adorable) and how shy she is with Martin. Honestly, this whole scene was wild! I think the idea of being deflowered so that you don’t go to hell is fun.

JL: Again to the topic of innocence/virginity, I think the story was ultimately about Martin and Rose, and their relationship mutually serving both of them to gain a new level of experience. In this sense, they are the innocent, and as the story unfolds, they undergo a valuable change to a place of more experience. There, I’ve killed a perfectly sweet and viable story by reducing it a formulaic cultural cliche. But really, I think that’s our task as consumers of this stuff, to boil it down to the inner movements that we all can relate to. There is, of course, so much more that could be said. Like about the “real life” stories I see on the internet regarding the use of virgins in occult satanism. The Epstein scandal and things like that. It’s all so convoluted that I don’t know what to believe about the reality of it. But I think this movie takes a good, light handling of a dark topic that does, in fact, have a certain prominence on the cultural landscape.

JF: I think you hit the nail on the head as far as the ideas of innocence and experience in this movie go. What I liked about the movie in that regard was that it really felt like the characters were pushing each other toward that next level of experience by bringing out the best in each other. It felt like there was something really genuine and warm between them, instead of feeling like this was happening only as a function of the plot, which is how I think it would go down in a lesser comedy.

Jack Lorang has been at the TCA since August of 2018. He made his way to Taos County from Chicago in the fall of 2010. Jack earned a degree in creative writing and has written and recorded original songs since he was young. He plays guitar and sings at various Taos venues under the moniker Madcat Jack Lorang.

Jazzmine Freedom grew up in Las Vegas, NM (just a ways down Highway 518, if you will) and knew what it was to be hungry for a thriving arts community. Her early involvement in various community theater projects made a huge impact on her. Years later, it was through local theater that she found her way into Taos’s arts community, where she has felt challenged, embraced, and thrilled. She is currently studying Journalism and Mass Communication with a focus in Strategic Communications at UNM.