The Last Week in the Back lot 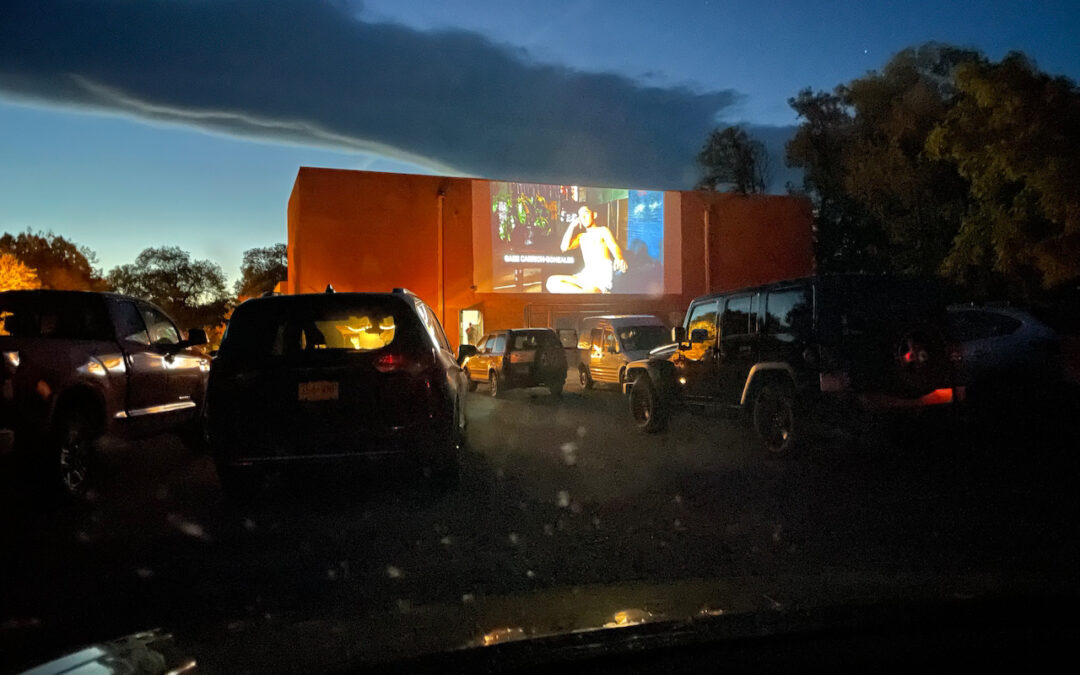 The Last Week in the Back Lot
By Chelsea Reidy

It was this time last year that Jack and I painted a movie screen on the adobe-colored stucco of the back wall of the theater. We borrowed scaffolding, bought five gallons of paint, and went for it. The fall weather buoyed us, with golden everywhere and the light breeze. So did people like Jonathan Pedersen, who lent the three stories of scaffolding, and Peter Halter, who said, yeah, just use the brightest white paint you can find.

Jack is unfazed by having to do exacting work in high places. He will climb extension ladders above theater seats to remove bulb bases with needle nose pliers at a height where necks could be broken. Outside on the scaffolding, he stood straight up on wooden planks flexing across the bars, talking while he rolled white on stucco. I rolled from a seated position. We shouted to friends walking in the park next door. It was 2020, but the golden flicker of fall ignited something hopeful. I recall being happy.

Weeks before the screen was painted, on a moonless night, Jack and I dragged a projector outside to shine Easy Rider on the back wall, trying to understand if a drive-in would work back there. We circled the parking lot in our cars and watched Dennis Hopper and friends on motorcycles cross the country and cross the building. It was cool, but was it cool for only ten minutes? Would it be cool for two hours?

The next week, another test. This time with colleagues and My Octopus Teacher. The ocean tinted beige with stucco. Everyone parked in different places. I attempted to act part of an audience, but I kept measuring viewing angles and calculating how far back was too far back. Clif was there that night. He takes care of TCA’s accounting and is discerning. I asked him, would you pay money for this?

Doing something new is hard. And while my job requires confronting new things every week, devising a drive-in movie theater was a big new thing and it scared me. I didn’t know how to do it. Inside the theater, seats are where people sit; the stage is where performers perform; and the movie screen unfurls from its box with a click of a button. The projector is secured a nice little room where it has been pointed and calibrated to the screen and it is never, ever moved.

Outside we are dealing with vehicles, windshields, stereos, radio transmission, weather, aspect ratios, 80-foot cables, all impermanent. I knew about none of this. After we looked at My Octopus Teacher on the stucco, the general consensus was let’s move forward, buy the white paint! And after Jack and I applied two coats on that beautiful day, I insisted on another test. This time we would invite people in addition to staff. There would be a start time. It would be a show (though not a public show).

Wes Anderson’s Fantastic Mr. Fox would make or break our drive-in. By this time, Alice had joined our team, and knows computers and thinks  through presentations better than me. Afterwards, attendees texted us, mostly saying, it was cool, it was fun, it worked well. But I appreciated the nit-picking bunch who said that the picture could have been brighter. That it was sort of cold. Where is the popcorn?

Since the spring, we have shown 34 movies on the back wall. We’ve seen families packed in truck beds for Jaws. A van outfitted with a top deck viewing platform for Rear Window. A woman told me that Sunset Boulevard was her absolute favorite movie; she’s seen it dozens of times but never from inside her car.

We have discovered that the best place for the projector is on top of my or Alice’s truck cab. The height is right. A truck is sturdy. A parked truck feels like it’s not going anywhere. We now know what to set-up first, what should be tested and how. We know what is likely to go wrong. We have systems, a method, and we each tend to duties without talking much. And when the movie plays, we station ourselves at our posts. Jack sits in his car, which we park next to the truck serving as the projector platform. I’m grateful that Jack is up for taking this post. I prefer to be inside the theater, on the stage, behind the wall. The movie is shining above me, on the other side of the wall. If something goes wrong Jack will call on the walkie talkie. I prefer this for some reason. I prefer to be the one alerted of a problem than to be the one who discovers it.

The back parking lot doesn’t look like much. There are five rows and each is marked by two homemade stanchions. A parking grid exists in my mind. The width between rows is 20 feet. Spaces are 9 feet wide. These figures are burned into my brain and I plead with volunteers to be exact when they park vehicles because I have calculated and measured and because I can become fixated on details. I have requested that a vehicle be moved six inches because I’m convinced that it will make a difference. On a Sunday morning, after coffee and toast, I know six inches does not make a difference, and I thank my colleagues and volunteers for nodding at my parking lot obsessions and then carrying on with making sure all who come are taken care of.

We are comfortable now. Two, instead of three or four of us can run the drive-in. Next March we will put another coat of paint on the screen. We will plan improvements and how to be efficient. Our new colleague, David, is starting on a list of potential films to show next year. I know the edges of this parking lot. Just like I know the edges of the theater.

For the last month, goatheads, lodged into the rubber of my soles, tap on the stage floor. I curse them while I pull them out of my shoes. Alice says, “These are extremely good at what they do. I’m in awe of them,” and she smiles because she really does appreciate their functionality. We learn about each other out back in a different way than we learn about each other in the theater. The theater is tight spaces backstage, or tight spaces in the technical booth. Outside there is room to talk and space to see each other. Jack is calm, in a constant state of knowing what really matters. Alice is enjoying the sunset and the function of the goathead. I worry. I’m overwrought, constantly trying to find problems before they show themselves. Jack and Alice balance this out with their genuine enjoyment of watching a movie at a pop-up drive-in theater.

At the end of the night the parking lot is put away, cleaned up, and dark. We close the gate and stand together under the street lamp on the south side of the theater. We say thank yous and goodnights. The show is done. It went well or there were problems. And this is my favorite part about the job – getting to work together. The thought of a party or a hangout or meet-up exhausts me. But I’m at ease in a team setting. It is my way of being with others.

Our team retreats to inside for the winter; we mark this with Wes Anderson’s The French Dispatch. It’s fitting since it was Anderson’s Fantastic Mr. Fox that confirmed we should go outside for the drive-in. In this way it’s like when the moon rises above the hills in the east as the sun sets in the west: something ends for a spell right as something begins.

TCA Gratefully acknowledges the support of Taos Community Foundation; a grant from TCF made the drive-in season a reality.