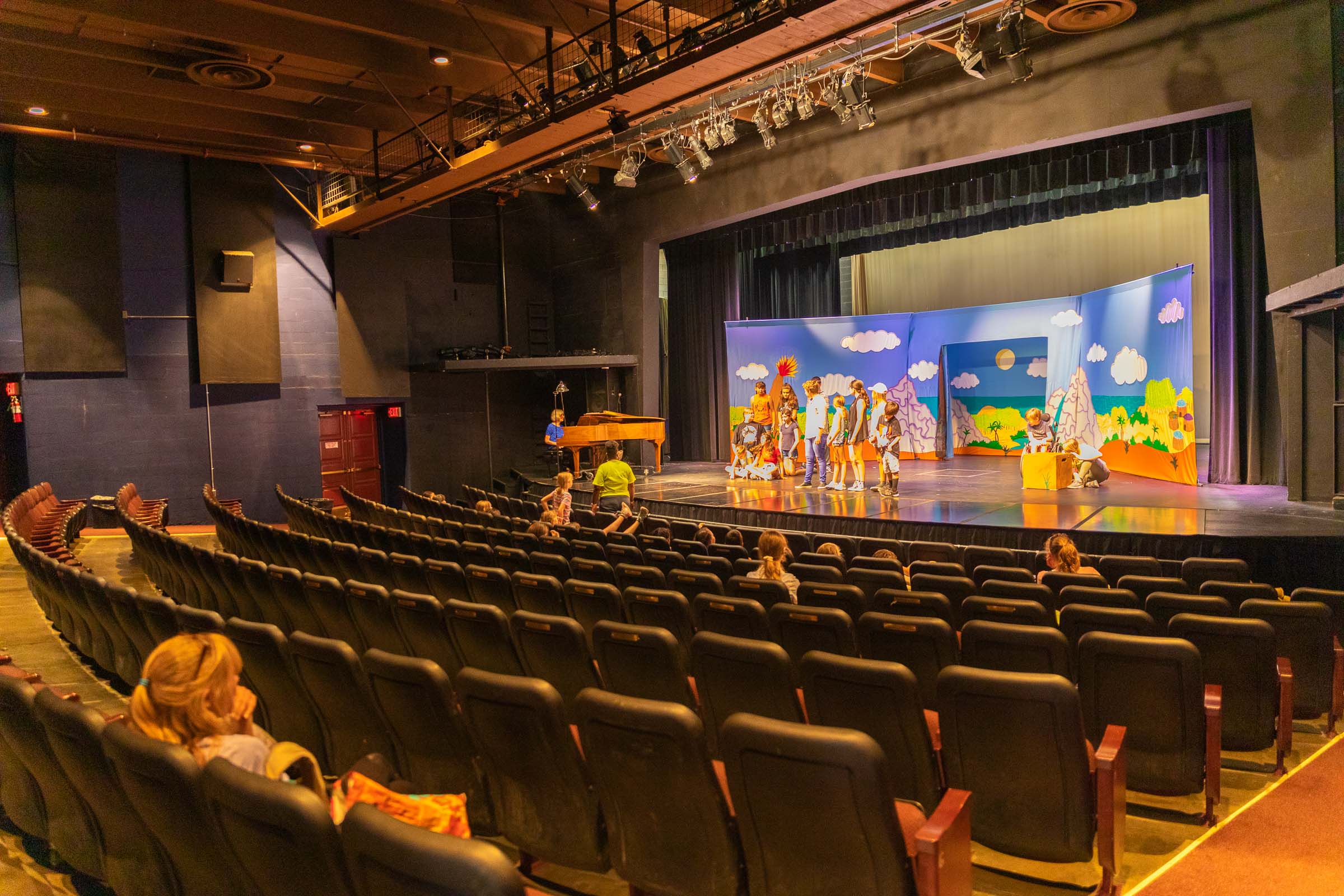 HOURS: OPEN DURING EVENTS AND BY APPOINTMENT. TO VIEW AN EXHIBIT DURING BUSINESS HOURS, PLEASE CONTACT THE TCA OFFICE

Approaching Taos from the north: TCA is on the east/left side of the main road through Taos, Paseo del Pueblo Norte, also called NM HWY 68. Turn left at the second signal, Civic Plaza Drive, into TCA’s parking lot.

The Taos Center for the Arts draws on its history as a dynamic leader for arts collaboration and partnership. Originally established by a group of working artists in 1953 and situated in the heart of Taos, the TCA serves and engages Northern New Mexico communities. With a 275-seat theater and two galleries, the TCA curates culturally relevant films, art exhibitions, and live performances as well as provides local, regional and internationally renowned artists, thinkers and performers the space to inspire creativity and foster a thriving love for the arts.

For narrative history of the property and organization that is now the Taos Center for the Arts: DOWNLOAD PDF (HISTORY)

Ms. Nachtrab spent most of her career in the non-profit world as a management, marketing and fundraising executive in Los Angeles, New York City and most recently in Washington, DC. She is Chair Emeritus of the Washington D.C. International Film Festival and a Founding Member of the Washington DC Film Society. She has an M.B.A from Johns Hopkins University and a B.S. from the New York State University at Oswego. Ms. Nachtrab moved to Taos in 2010 and is Chair of the Taos Opera Institute and co-founder of TCA Film Fans. Ms. Nachtrab chairs the TCA Financial Sustainability Committee.

Trisha is founder and owner of Fong Norden Design, a graphic design firm that focuses on branding and marketing for small businesses. Her work experience includes the healthcare architecture industry where she continues to work as a consultant. Trisha has recently moved to Taos with her husband David Norden, from Stowe, VT. With a lifelong interest in the arts, Trisha has served on the boards of the Vermont Women’s Fund, Stowe Free Library, and Stowe Dance Academy.

Before retiring, Holly was legislative aide to a member of the U.S. House of Representatives, a political campaign coordinator, a community activist, and in a second career, became archivist of her aunt’s musical career. Since moving from Los Angeles to Taos in 2002, she is a full-time volunteer.

Rome’s professional career encompassed 30 years in the Broadcast Television industry involving product development and senior level marketing roles for equipment manufacturers; including deployment of equipment for terrestrial broadcast, cable, and satellite delivery and support for Olympics programming.  He has held positions of Regional Chair for the Society of Broadcast Engineers and national board of directors for the Society of Motion Picture & Television Engineers.  He served on the Board of Directors and as the Capital Campaign Chairman for the Center for the Arts, Evergreen, CO managing funding, historic preservation, and repurposing of a former church as a community art center.  Rome is an avid skier having retired after 22 years with the National Ski Patrol.  He holds a Bachelor of Art in Industrial Design and an MBA from Northern Illinois University.

Jim is a retired Dentist who practiced in California for over 30 years before retiring to Taos in 2004. He and his wife Patti share a strong interest in both the visual and performing arts. Their artistic focus is on the moving image as an art form. They have produced a number of experimental and documentary works.

Mary Domito is a local businessperson, owner of Taos Lifestyle & Sleep Sanctuary and Mattress Mary’s Mountain Lifestyle, plus stores in Alamosa and Santa Fe. She moved to Taos in 2004 and has been active with Stray Hearts and served as a TCA board member from 2008-2016. She resigned from the TCA Board due to the fact that her business expansion required her to be out of town. While on the Board, Mary was a committed board member devoting her time to providing weekly reviews of TCA movies for KTAO. She is recommitting to the Taos community and will have the time and energy to devote to the Board.

Mary was Professor of Cell and Molecular Biology at Northwestern University Medical School for 27 years, then relocated to Washington State University where she was an Edward R Meyer Distinguished Professor in the School of Molecular Biosciences for 11 years. She received BS and MS degrees from the University of Houston, and a PhD from the University of Illinois. She conducted research on signaling pathways in the ovary and published more than 145 papers in peer reviewed journals. She was President of the Society for the Study of Reproduction and received the Research Award from this Society, an Associate Editor of Molecular Endocrinology. She retired in 2017 and, with her husband John H. Nilson, took up permanent residence in Taos. She enjoys aerobics, golf, gardening, and growing orchids.

Carolyn Haddock is one of the former owners of The Historic Taos Inn and the widow of Doug Smith, a past President of the TCA Board. Carolyn is a long time supporter of the TCA along with her husband, as a volunteer and major donor. She is the Treasurer of the Taos Opera Guild, has served on the TCA Art Committee, and is one of the founders of the Taos Community Foundation.  Carolyn brings valuable accounting skills that would equip her to take over the Treasurer’s role, should that officer’s position be vacated.

Sarah is the owner of Hart Print Shop, a design and print business that focuses on hand- drawn, hand-printed promotional poster/advertising for local musicians, non-profits and small businesses. She is also is co-owner of Ennui Gallery, a co-operative art gallery/ music venue/ community space and record store in downtown Taos. Named 2017 Taos’ Visionary Artist Award, Hart has been a member of the TCA’s Art Committee, curated the 2019 40 Under 40 Show at The Encore Gallery, and was recently selected for the 2020 showcase of contemporary artists at The Harwood. She moved to Taos in 2001, devoting her time to help and support the community she loves. She is excited to continue her mission as a new member of the Board at The TCA. Besides her love for art, she loves to be outside to garden, hike with her dog, float the river, cook, bake pies and collect dictionaries for their pictures.

“Andy” was based in Chicago for many years where he was Vice President of Marketing for the American Institute of Steel Construction. Before that he worked in sales and marketing for the construction division of a major steel company both domestically and in Europe where he spent six and a half years. While there he took advantage of his position to become fluent in French. Andy retired in 2004 and shortly after that moved to Arroyo Hondo where he is a full-time resident. He enjoys skiing, hiking, fishing and the rich cultural scene that is Taos. He has a BA in English Literature from the University of Colorado and an MBA from the University of Chicago.

Christiane Kelley Riveles has taught English as a second language in public schools, edited standardized tests, and escorted tours to the former Soviet Union. Since moving to Taos in 2010, she has served as president and educational liaison of the Taos Archaeological Society, docented at the Mesa Prieta Petroglyph Project and D.H. Lawrence Ranch, and volunteered for Reading to End Racism and Youth Heartline’s CASA program. Chris is a graduate of Vassar College and Columbia University.

Steve is a native Texan and along with wife Rhonda graduated from the University of Texas at Austin. Before moving to Taos full-time 10 years ago, Steve spent 18 years in Los Angeles, CA where he was Senior Vice President for Kindred Healthcare, with responsibility for fourteen hospitals in 6 western states, and later over strategic planning and business development at corporate offices in Louisville, KY. Steve enjoys the usual Taos activities of skiing, hiking, yoga and the art/music scenes.

Max was born and raised in Dixon. Although he attempted to escape to the big city, he eventually succumbed to his deep appreciation of small communities and returned to New Mexico in 2006. He is a musician who plays in many local bands; co-owner of Gizmo Productions, a web development and marketing company; a founding member of KNCE True Taos Radio; and he helped develop LiveTaos.com. His kitchen counter is usually dusted in flour, his house is a chaotic hub of constant creation, and his car is always a mess, but he’s OK with it because he gets to play music, fly fish, climb, ski, cook, bake, garden, adventure, tinker, and create. He’s stoked to be part of the TCA team.

*Members of the Executive Committee

For ten years Colette was Associate Director and Acting Director of the International Center for Writing and Translation in the School of Humanities at University of California, Irvine. She has taught poetry and creative writing at UC Irvine, Pitzer College, Loyola Marymount University and elsewhere. In 2011, she moved to Roswell, New Mexico, where she taught yoga and opened a yoga studio as well as worked at the Roswell Museum and Art Center and the Roswell Public Library. She has a Ph.D. in English and an MFA in Poetry from UC Irvine. She is the author of Mean (U. of Chicago Press, 2008), a book of prose poems, and “Holdings,” a text-object forthcoming from Container Press in 2019. She is Poetry Editor at Zocalo Public Square.

Chelsea is from Guam. In 2012 she was surfing and sailing off the coast of Shikoku, Japan. In 2015 she was picking and selling pinon nuts in Taos, New Mexico. In December of 2016, she stage-managed a musical at the Taos Center for the Arts, then secured a job in the building as a projectionist.

Marty’s professional background, before happily retiring to Taos with her husband, spanned forty years in college admissions and counseling and includes founding and directing the non-profit organization, Colleges That Change Lives. She is always happy to share stories and photos of her three children and four grandchildren. For questions about membership: tca@tcataos.org. For questions about membership: tca@tcataos.org

As a child growing up in Las Vegas, NM (just around the Sangre de Cristos) Jazzmine knew what it was to be hungry for a thriving arts community. Her early involvement in various community theater projects made a huge impact on her. Years later, it was through local theater that she found her way into Taos’s arts community, where she has felt challenged, embraced, and thrilled. She is currently studying Journalism and Mass Communication with a focus in Strategic Communications at UNM.

Trying to find a balance between the world’s wonders and human wonders, Alice keeps one foot in the mud and the other one in art. After getting a master’s degree in cultural public policies, in France, where she grew up, she traveled across the US with a band. She recently moved to Taos.

Jack Lorang has been at the TCA since August of 2018. He made his way to Taos County from Chicago in the fall of 2010. Jack earned a degree in creative writing and has written and recorded original songs since he was young. He plays guitar and sings at various Taos venues under the moniker Madcat Jack Lorang.

The TCA offers many spaces to showcase media, performing or visual art events. Rent the beautiful Taos Community Auditorium, which has a Proscenium stage and seating for 275. The historic Stables Gallery is available for a variety of events and the Encore Gallery, which features the work of local artists, is also available for lectures, workshops and events. 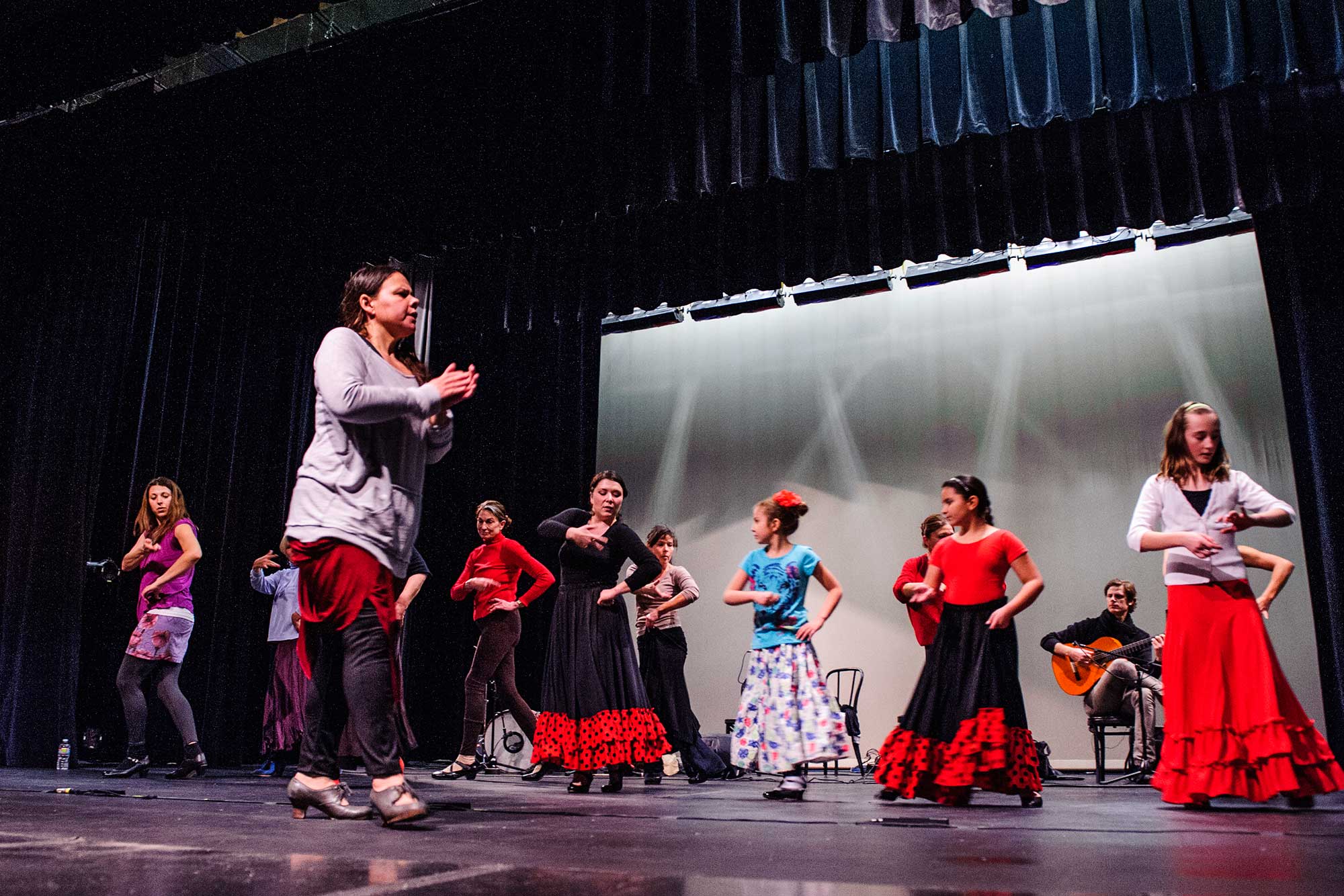 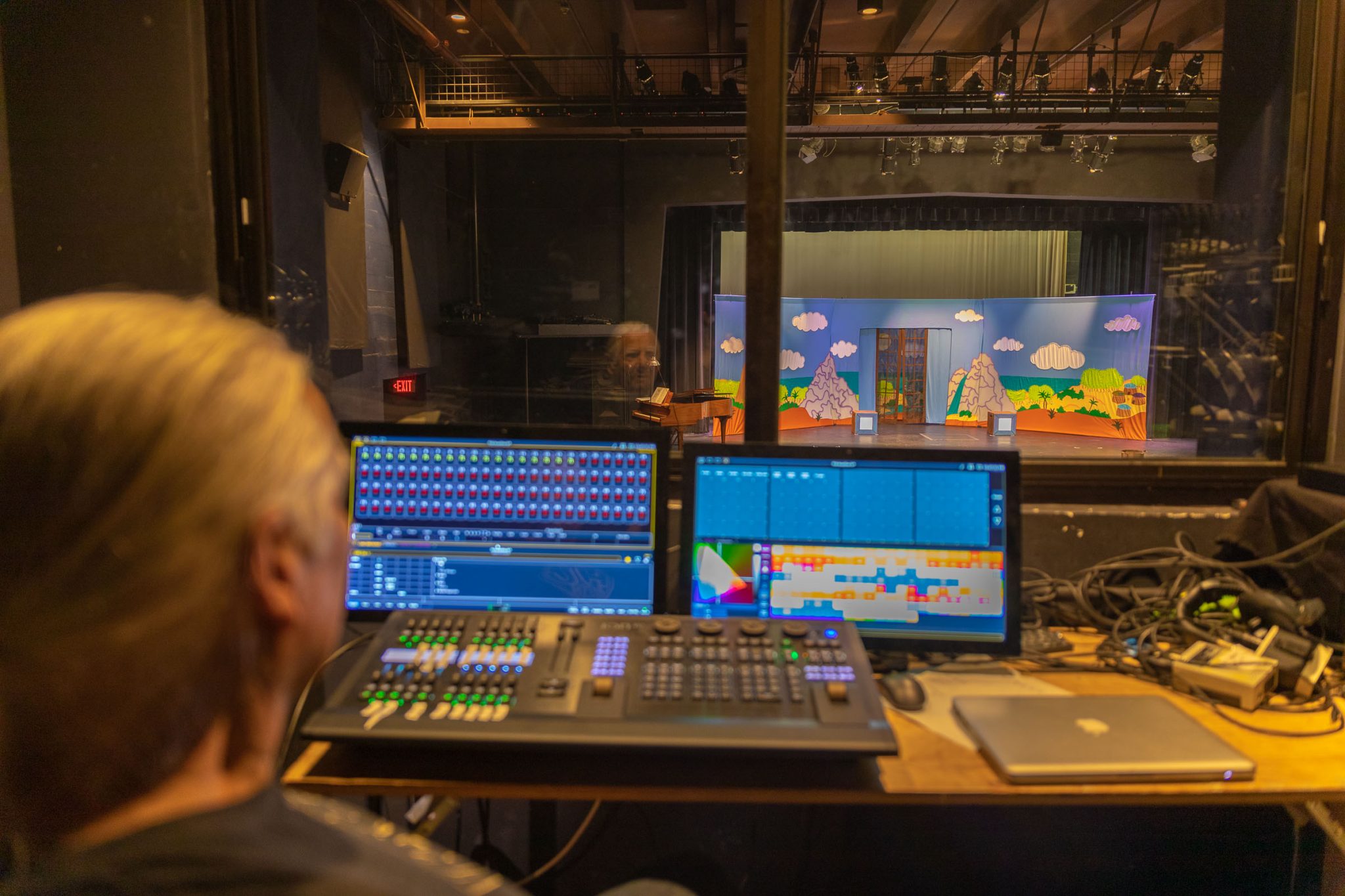 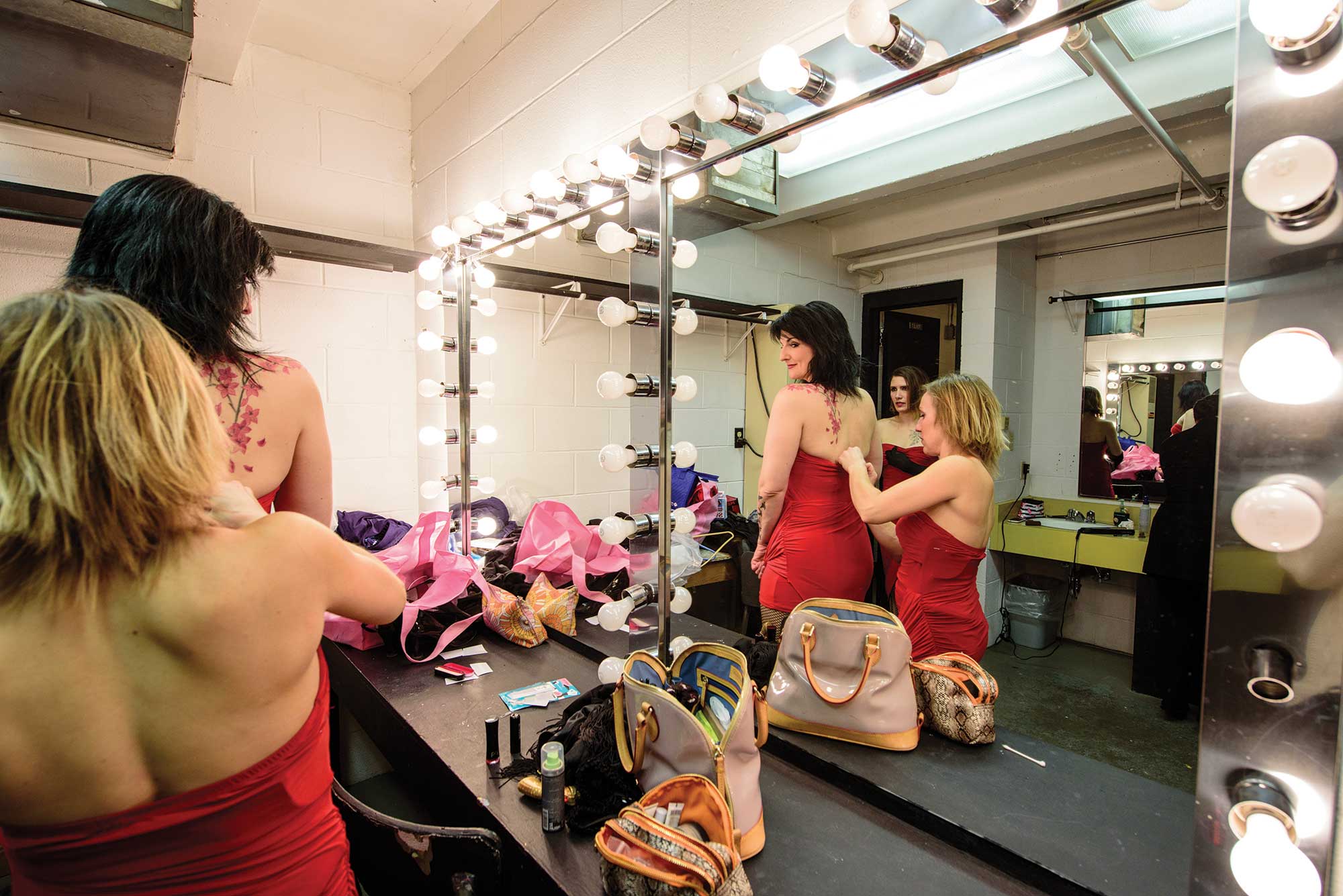 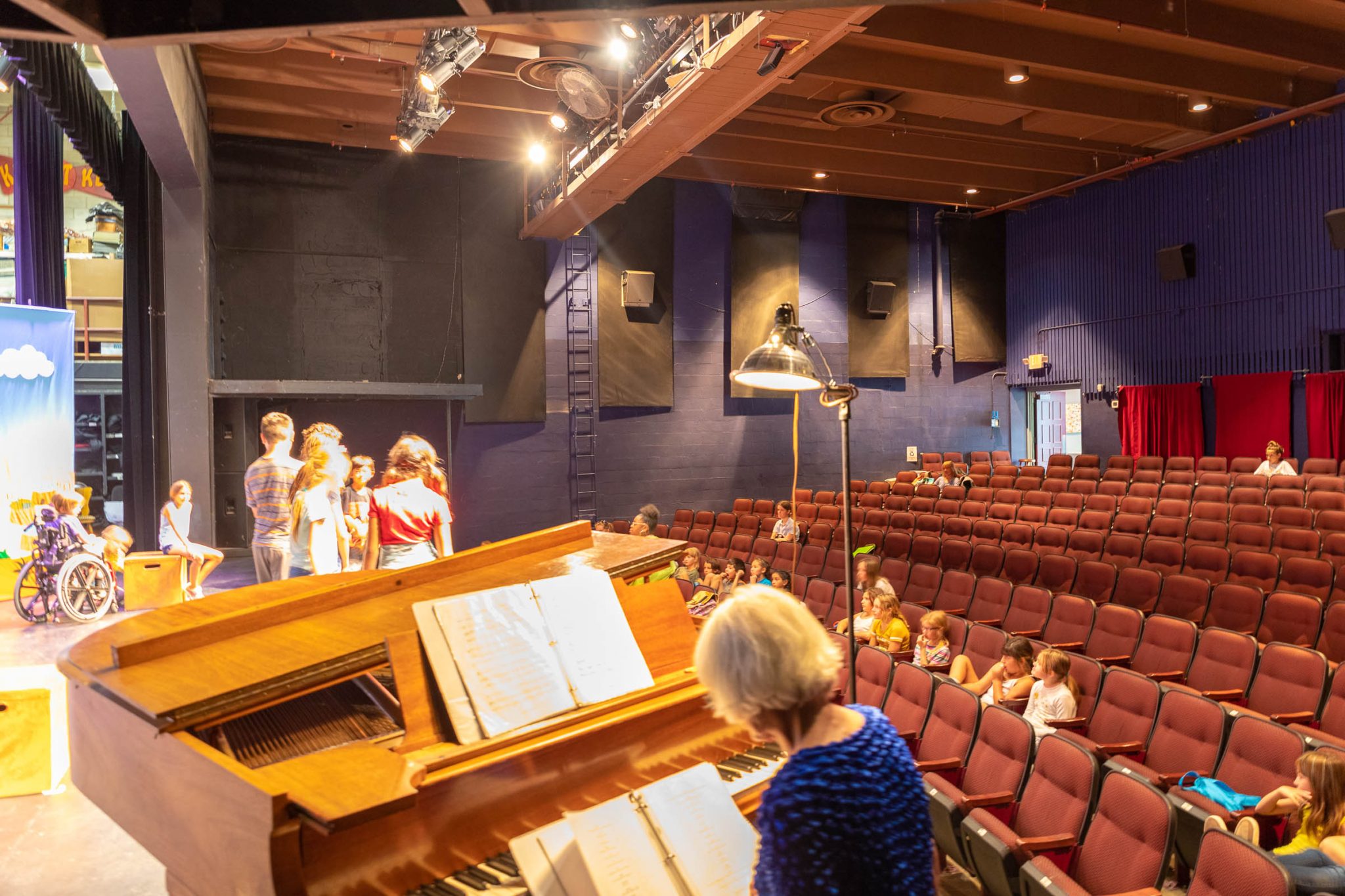 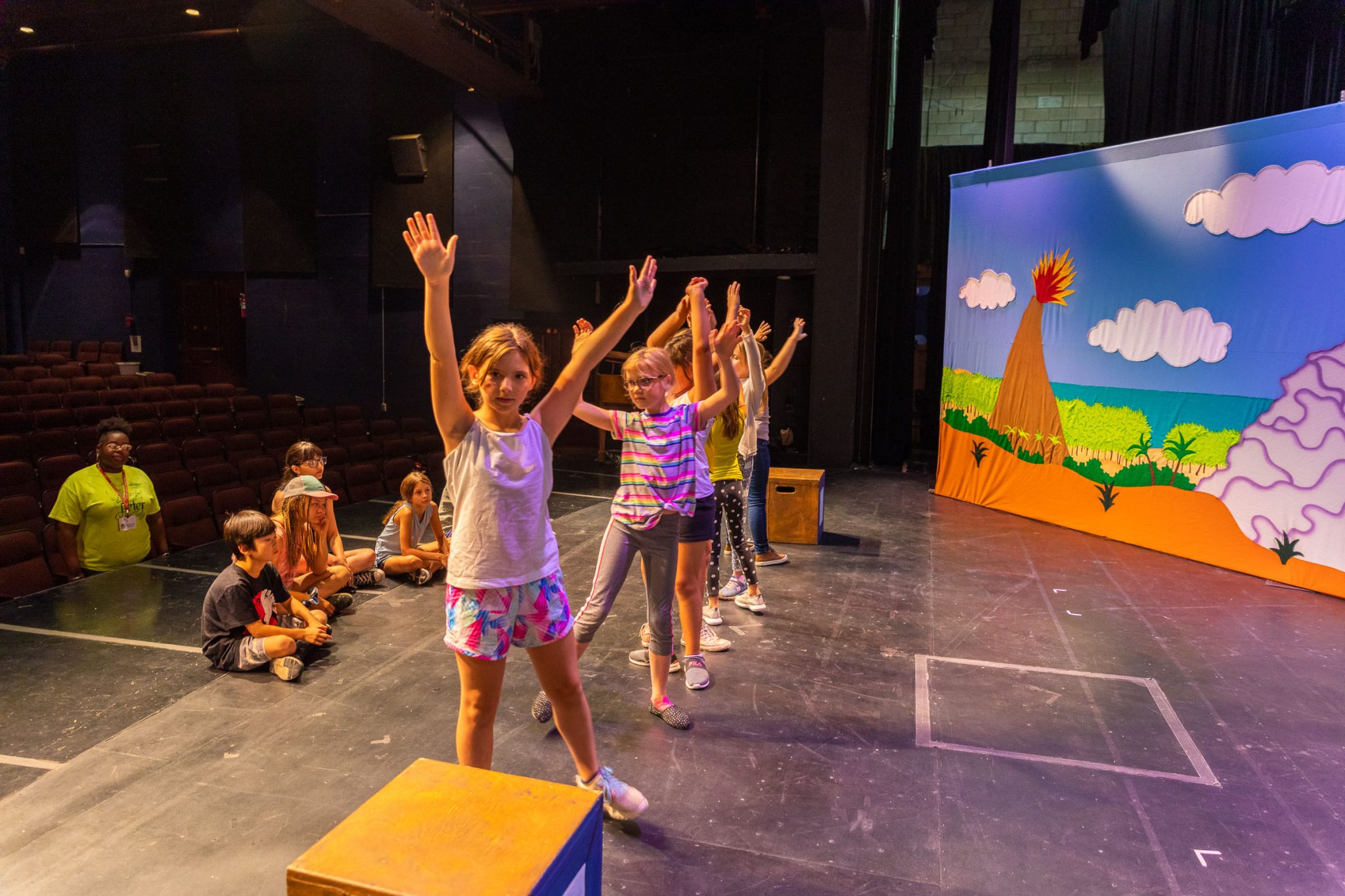