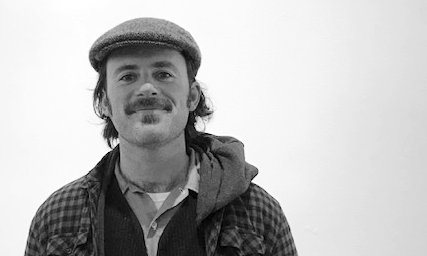 Where did you grow up?
I grew up on the swampy side of Cedar Lake in northern Illinois, near the town of Lake Villa. It was a small town when I was young, but as I grew older it was swallowed up by the suburbia of the greater Chicago area.

Who has influenced you?
I was influenced a lot by certain teachers in school who made me feel unique or special. Also my parents who set great examples of what it is to be a good person. And my friend Brad Swet who has always had a way of living inside my brain making sure that I do things that I will be proud of because they are things that he would be proud of.

Why TCA?
I had wanted to be a part of the TCA for a long time before I ended up here. Mainly because I was trying to imagine ways to branch out from the service industry. Now that I’m here I love experiencing such a diverse genre of arts on a daily basis. I also love the role that the TCA plays in bringing the community together to do really cool things.

What inspires you?
What inspires me is an inner desire to understand what we all are doing here and the realization that understanding involves actually deciding the answer for myself. I think we create our own reality and it’s a gift to have the opportunity to do that. I’m also inspired by all the beautiful people in my life.

What else do you love about Taos?
What I love about Taos is the constantly changing beauty of the landscape and the sky, the strong values of community that have naturally come to exist here, and the diversity of the cultural landscape.

Who’s your favorite Taos artist?
That’s a tough one there are so many talented and inspired people here. I’m going to say my friend Eli Walters, the painter.

Favorite music or musician?
I was raised on Bob Dylan, Neil Young, and the Grateful Dead. Then I got into Leonard Cohen and Townes Van Zandt, I also love jazz and some classical music.

Tell us something about you that nobody knows.
I was a communist when I was a kid. I’m not sorry.