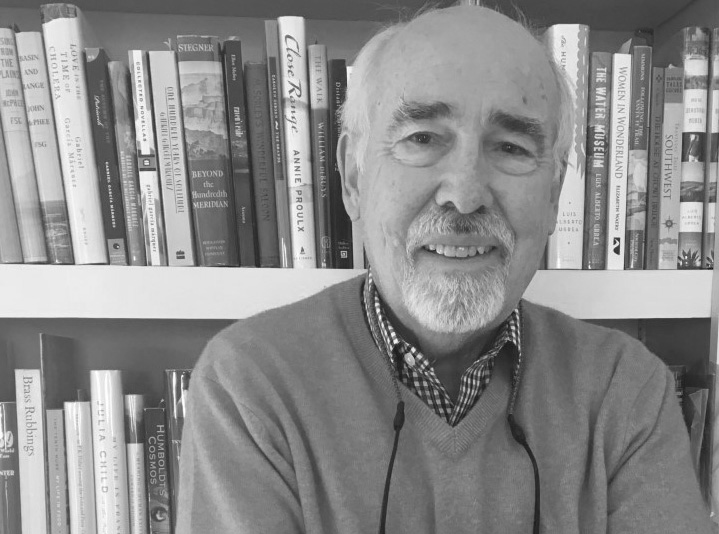 Where did you grow up?
I grew up on a sheep and goat ranch in the Texas Hill Country, a half-day drive from San Antonio. The ranch was established in 1878 by my Great-Grandfather. My Granddad and Dad were raised there, too. Electricity did not come to the ranch until after WW II, so we generated our own with a wind-charger on a tower. My mother home-schooled me on the ranch before I went away to high school.

Who has influenced you?
In public life it was FDR and his vision for leading our country through the Great Depression; in literary terms, it was Dickens and Faulkner, but I also enjoy discovering more recent strong voices in fiction and non-fiction, like Louise Erdrich, Terry Tempest Williams, and David M. Carroll.

Why TCA?
One of the major strengths of the TCA is its multi-dimensional programming that reaches out to so many parts of the Taos community and beyond.

What was the first TCA event you attended?
It was the summer we first moved to Taos almost 20 years ago when we discovered the Taos School of Music performances at the TCA. Can’t wait for them to come back!

What inspires you?
Seeing the results of good leadership that identifies needs in our community and works as a team to make Taos a better place to live. This is what makes the TCA Board so strong.

What else do you love about Taos?
The sometimes quirky approach to the arts, and the willingness to stay open to different forms and methods of artistic expression.

Who’s your favorite Taos artist?
I can’t name just one, so my pick this week would be the husband and wife team, Barbara Latham and Howard Cook, especially for their remarkable prints. I’ll share some more names the next time we meet.

Favorite music or musician?
Again, I can’t name just one! Today it is Miles Davis with his “Sketches of Spain” as well as Johann Sebastian Bach’s keyboard work performed by Glen Gould. Next week you’ll find Ella Fitzgerald singing with Count Basie in the morning and Aaron Copland’s symphonic works playing in the afternoon. The Beatles will be back on the turntable soon!

Favorite film?
Can’t be one, so the two are: ‘Black Orpheus’ and ‘Cinema Paradiso’.

Tell us something about you that nobody knows.
In the 1950s I stayed up every Saturday night listening to ‘Monitor Radio,’ beamed from the NBC studios in New York and hosted by Dave Garroway. It was a magazine-of-the-air mix of news, sports, comedy, variety, music, celebrity interviews and other short segments, but my favorite times came when they cut away to live feeds at famous jazz clubs in Manhattan. On this show I learned about The Village Voice when it started publication, and my subscription (most likely the only one in my rural part of Texas) probably landed me as a teenager on a subversive watch list with the FBI!