Jack Lorang: I watched Escher: Journey Into Infinity last night and, although I didn’t like everything about it, I found it novel and interesting overall. Strangely, one aspect of the movie that annoyed me at first is, after some reflection, leaving the strongest, most positive impression: that the picture is narrated in the first person, via the voice of Stephen Fry presuming to be Escher himself.

Jazzmine Freedom: I walked away with a similar impression; it didn’t wow me but overall, I liked it. The tone of the movie struck me as a little odd. I wasn’t crazy about Stephen Fry as the voice of Escher either, although it grew on me as the film went on. I liked that the film used Escher’s own words (diary musings, excerpts from lectures, correspondence), but Stephen Fry was such a famous, boisterous, British choice! I think I would have preferred a quieter voice with a Dutch accent.

JL: Yes, at first I felt that this narration was coming off as cheesy and contrived, but as the story continued to unfold I found myself growing more invested…

JF: Totally. The scales tipped in the film’s favor for me because I did enjoy the material. I loved Escher’s reflections on the intersection between mathematics and art. He says something about being too dumb to be a mathematician, and floating instead between the worlds of art and science. I wish I remembered the quote better, but I thought it was so great.

JL: Oh, yes. At some point, Graham Nash relays an anecdote where he calls Escher on the phone to tell him what a great artist he is, and Escher says, “Artist? I am not an artist. I am a mathematician.” This does shed some light on Escher’s own impression of himself and what he was trying to achieve. 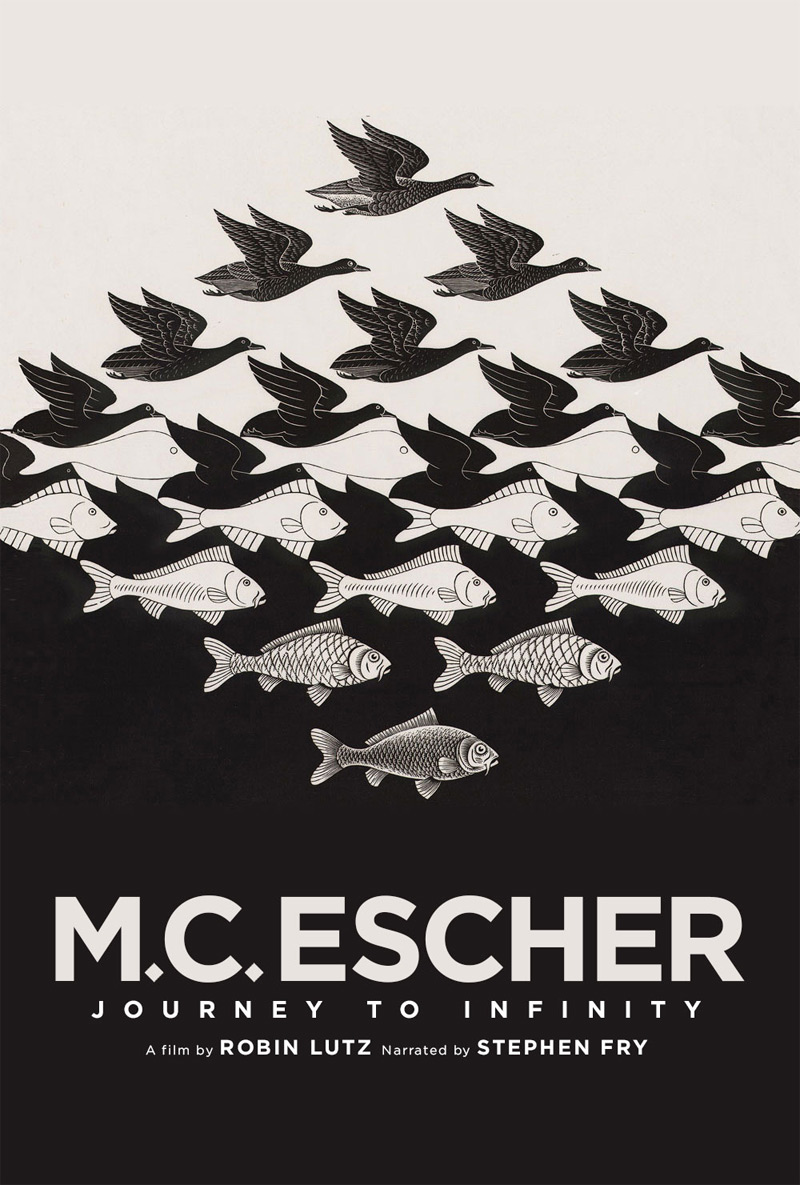 JF:  Right! Although Nash’s talking head contributed to the odd feeling for me. He seemed to appreciate Escher a lot but did not have much information or insight to add. Overall, the form of the film didn’t impress me much but I liked the animation of Escher works!

JL: Yes. Their use of the P.O.V. camera angle seemed odd to me, but it made sense when we, as viewers, find ourselves staring at the ceiling of a cathedral, or a Tuscan village-scape, and see the image transform (by way of seemingly novel and impressive special effects) into some famous Escher print.

This effect, in combination with other, more dramatic, CGI animations of Escher’s works, makes up the unique cinematic offering of the movie. I also think the music plays an important role in achieving these different effects. 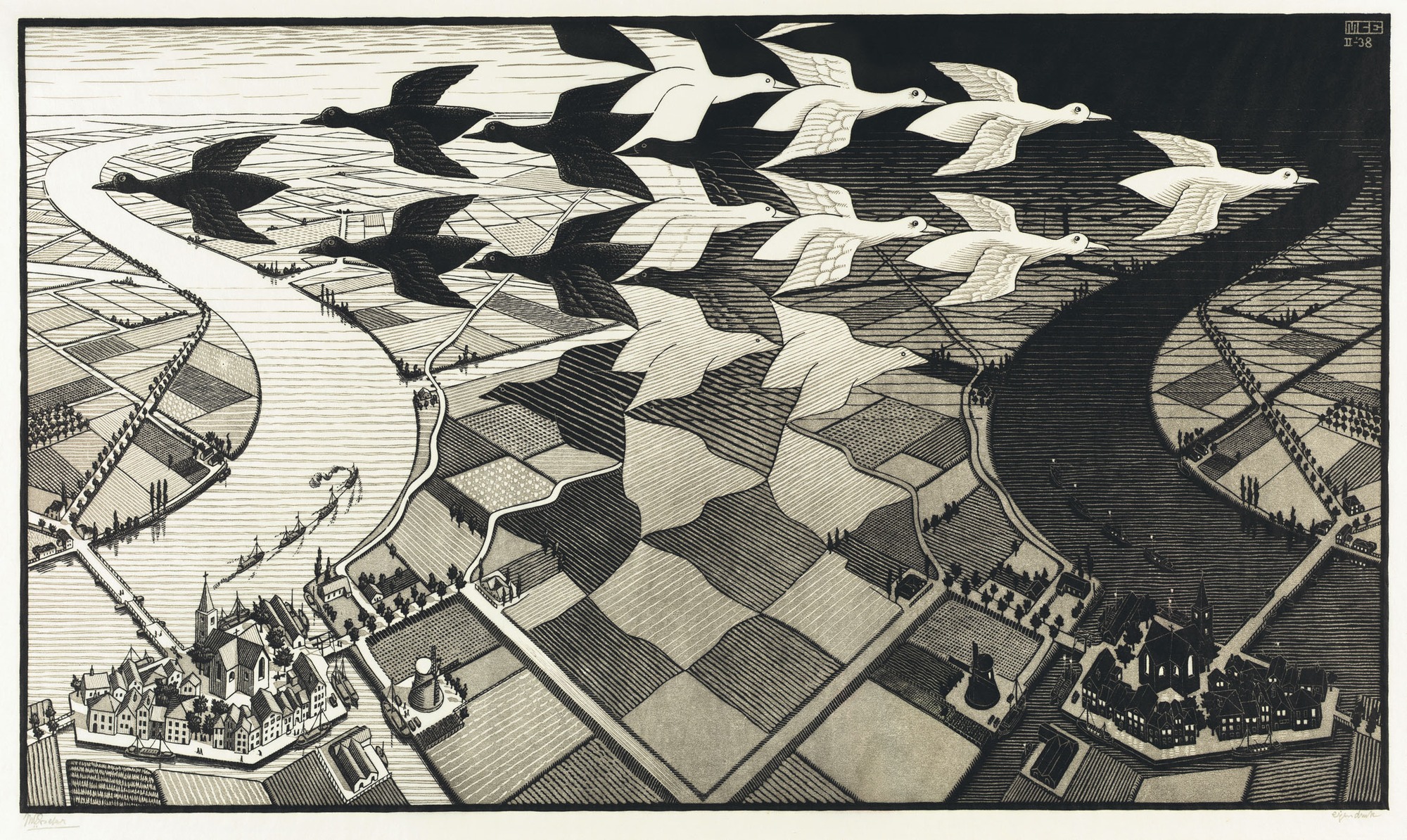 I didn’t know much about Escher before this movie, but I do have a deep interest in fractals and chaos theory and I got so excited when he was describing his goal of “expressing endlessness on a finite plane.” I also  found it really poignant when he described feeling like he spoke a language no one else did. I’ve been reading “Chaos” by James Gleick and it seems that most people who stumbled onto some facet of Chaos theory through work in another field felt this way at some point.

JL: I haven’t read the book by James Gleick or much at all about chaos theory. But I have been working through a book by Douglas Hofstadter called Gödel, Escher, Bach: an Eternal Golden Braid. Published in 1979, seven years after Escher’s death, the book delves into the mathematical concepts and philosophical ideas inherent in Escher’s work. It is a whole mathematical riddle of a book that uses Escher’s art, Bach’s compositions, and the analytic philosophy of mathematician Kurt Gödel to demonstrate how the human mind recognizes the limits of logic and rationality and is able to reveal these limits by playing around creatively in their vicinity. Certainly, the movie touches upon these concepts, when it mentions Escher’s prolific use of tessellations – which reminds me, I loved the scenes that showed how he was influenced by the art and architecture of the Arab world in Spain at the Alhambra. I think the filmmakers could have done more to bring out these ideas about which Escher was so passionate.

JF: YES! I loved the scenes that cover Escher’s visit to Alhambra too. For me, those represented a huge turning point, both in the movie and in Escher’s life. I was hooked from that point forward. 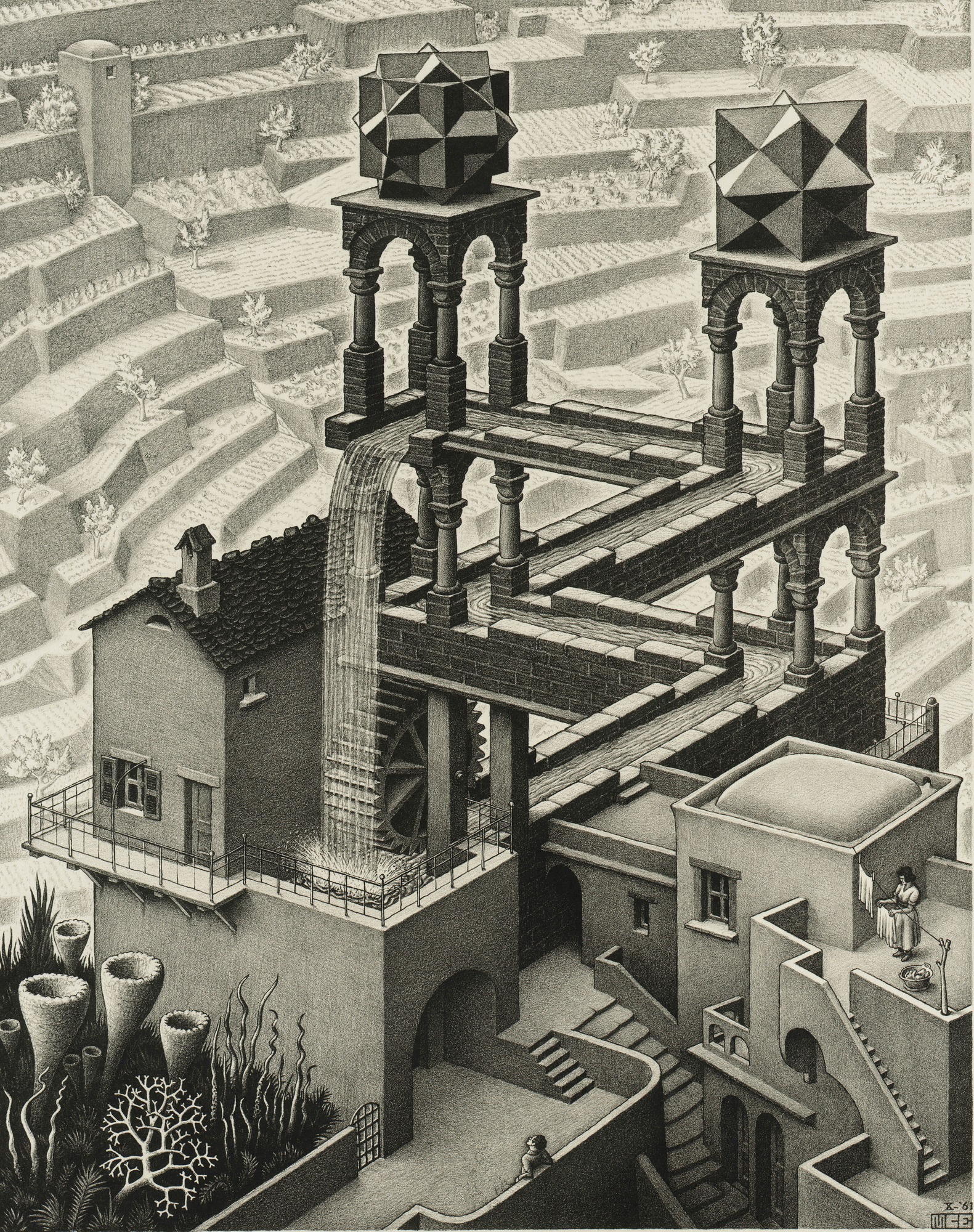 JL: I expected to hear more about his fascination with tricky loops and the limits of mathematical reasoning. What I learned from the movie is just how inadequate he seems to have felt.

The narration makes it clear that he didn’t understand and bitterly resisted this flamboyant or ecstatic image of himself and his work in pop culture. Escher’s words suggest that he didn’t care about achieving fame among the orgiastic masses of the sixties, but rather that he longed for acceptance and respect among his peers in the circles of fine art and intellectualism. From the sounds of it that longing was never quite satisfied.

JF: Yeah, I think you nailed it. The film did seem taken by the glamour of Escher’s pop culture image. I also wish that the film had explored why the counterculture movement was so interested in his work and what it was that people gravitated to.

JL: I think this is an important question. If we investigated this further I’m sure we would find a whole wave of other counter-cultural phenomena that effectively expose the gap between the limited logocentric materiality of the mainstream at that time and the kind of philosophical sense the infinite that Escher evokes. I think psychedelic adventuring did have a lot to do with Escher’s mass appeal but, according to what we learn from the movie it had nothing to do with inspiring his own revelations. I suspect there is more at work here, and just what it is, I find compellingly mysterious!

I would say the movie was worth seeing. The parts that we spoke of favorably – the landscape/art comparisons, the animation, etc – were definitely effective for me, and I think Escher’s own words really do shine through.

JL: Yes, for all the criticism we’ve hurled upon it, I agree that it’s worth seeing. I would recommend it to anyone with an appreciation for Escher’s work, as well as for any creative person looking for yet another inspiring reminder of the trials and tribulations that always seem to accompany the creative life.