A few weeks ago I faded down the house lights on 275 empty seats at the start of a movie—a movie that was open to the public, that not a single person came to see.

Well, one person did show, but only because confusion about the schedule. I approached the gentleman at concession; “You’re back for this one again?” He’d been the previous week and had already watched this film. Once it was determined that the newspaper printed incorrect information, he left.

Showing a movie to an empty theater has a certain kind of thrill. It is an offering to the gods of cinema. It screams: The show will go on! A lit-up screen beyond empty seats also raises interesting questions: What is art without an audience? What is programming in a pandemic? There has been plenty written about why independent theaters are essential to filmmaking as an art form and why they are doomed. There also has been plenty said about how the big studio movie industry makes it extremely difficult for artists just starting out.

The movie ran—our theater has a dedicated crew of volunteers who work the box office and concession; they all wanted to stay for the film. I stood with Carlene in the lobby. We said maybe someone will show up late! Headlights flashed through the glass then wheeled around and away.

No one came. Credits rolled. We turned off the machines and the lights, punched at the doors and walked into the night. I asked Carlene, who has been part of this theater since 1983, when was the last time we’d had zero turnout? “I don’t want to say never so I’ll say, I can’t recall,” she said.

Selling movies is odd. And the phrase “selling movies” leaves a sour taste in the mouth when we prefer to say we are offering unique, contemporary, international, art-house titles to Northern New Mexico. We are. But we are also selling movies.

We’ve worked with some high schoolers recently. They tell us they don’t watch movies, only TV shows and YouTube clips. I talk to my mom, an enthusiastic TV and movie watcher, usually unflinching in her search for a great story. These days, she says she avoids the hard stuff. Even the good hard stuff. 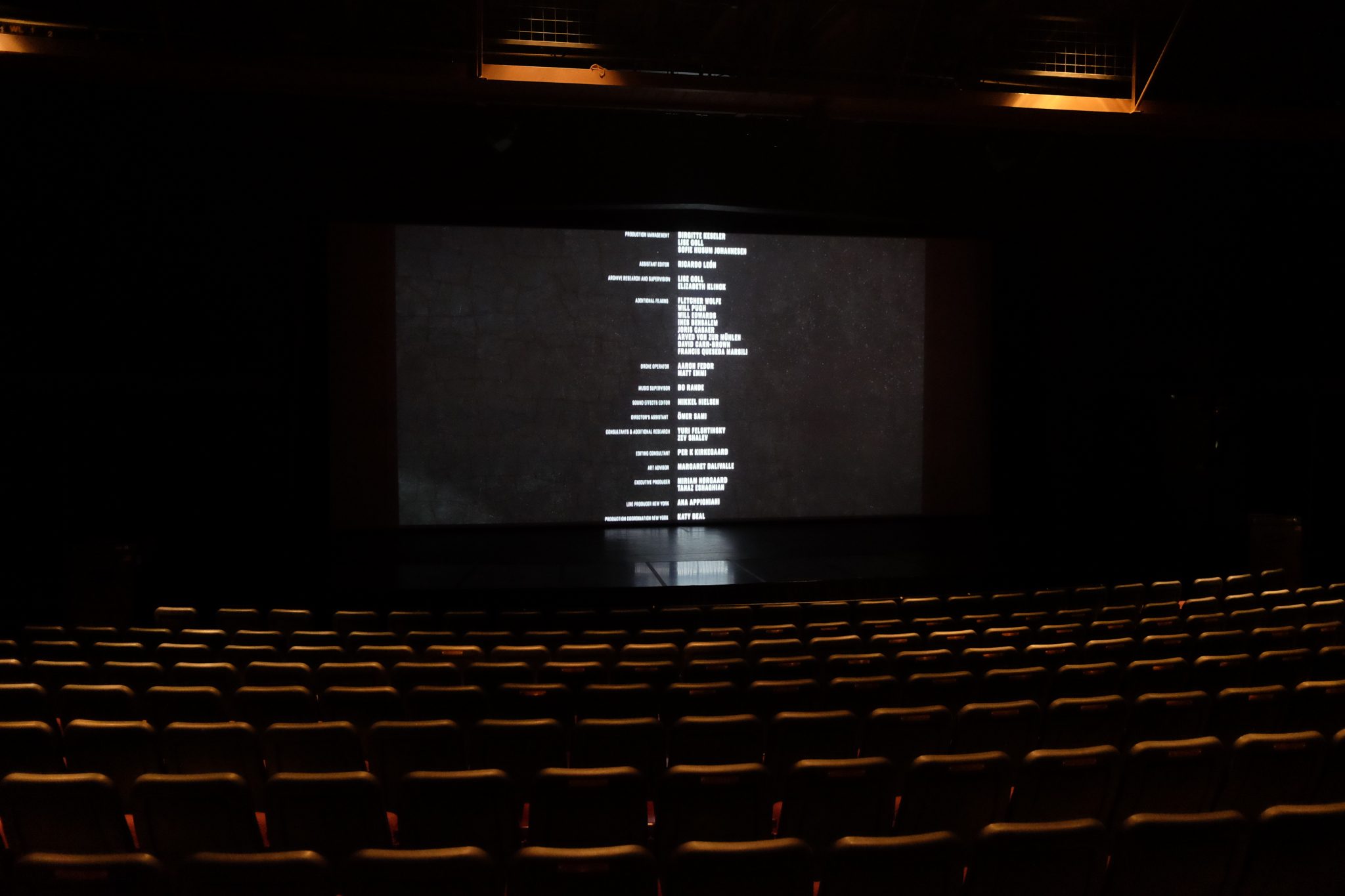 We see this in our theater. Our best attendance over the summer was for Summer of Soul, Questlove’s documentary about the Harlem Cultural Festival, which everyone heard about from a friend on social or saw an ad for on Hulu. And we see low numbers for films that are challenging in subject matter, that require some work from the audience, that perhaps some haven’t heard about. Right now, our film committee is discussing Mass (2021), set to release this month. Those of us who have seen it are blown away by how powerful it is. The film shows absolutely no violence, but it’s about reconciliation after a school shooting. Are people up for this? I asked my mom if she’d watch this movie and she said, “Hmm.”

Why would anyone want to work while viewing a movie these days? Particularly when we’ve been home for nearly two years choosing exactly what we’d like to see, when we’d like see it, and have thousands of choices at our fingertips to suit whatever mood we happen to be in. Why go somewhere and sit with others, (others we don’t know!), to watch something that we haven’t heard about? Even I don’t have an answer to this. I’m not trying to convince people to come to a theater right now. On my free night of the week, I’m at home watching Squid Game on Netflix like everyone else. And also, our state reinstated Crisis Standards of Care for hospitals. So there’s that, and it’s real.

There is not hope in selling tickets. Forget that for now. I find hope in conversations with colleagues as we learn about film curation together. Carlene on Titane in a group text: “No, no, no to TITANE.” And David, about the same movie, there was “something strange and tender about it.” I find hope in the conversation around Sweet Thing, a movie that few people saw in the theater this summer, and that ended up on Zoey Birdsong’s top movies of all-time list. A movie that we talked about for weeks, a work of art that will stay with us for some time. I find hope in the equipment we have in the theater and how collaborations are amounting to young people in our community exploring how to use this equipment. All of this hope grows from being surrounded by people who are down to learn along the way, face zero but keep going because we care about movies and we believe in places like this.

For now, we fade lights down to empty seats or the cinema gods or to a few human beings, believing in Kiyoshi Kurosawa’s Wife of a Spy, Wes Anderson’s, The French Dispatch, and Kristen Stewart in Spencer. And there’s Hive, the Sundance triple award winner based on the true story of a woman during the war in Kosovo. If we book Hive, we expect a tiny turnout. But we’re behind it. Isn’t that what independent theaters supporting independent film is all about?

We showed David Lynch’s original Dune (1984) on the backwall of the theater a couple of Fridays ago because the new Dune releases this month from Warner Bros. Pictures. Lynch’s Dune also showed inside the theater “thirty-seven, maybe thirty-six years ago,” Carlene recalls. A few days ago, something funny happened. In a strange turn of events, the new Dune (Directed by Denis Villeneuve) was shipped to us from Warner Bros. Pictures (a message from the deep?) Movies can be like different kinds of mirrors. What do people want to put themselves in front of? And movie theaters are like sailing ships trying to catch the right winds. We’ll be here with the new Dune for the next two weeks, sending up another weathervane during these weird times.