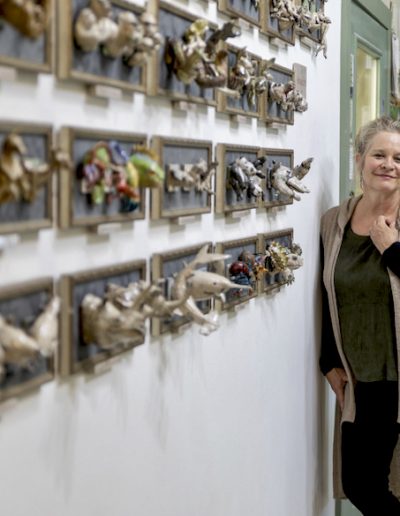 Mandy Stapleford – A Nobility of Beasts: A Ceramic Narration of Beastial Assemblage

Mandy Stapleford is an award-winning artist, an author and an entrepreneur. Originally from Arden, a small Shakespeare-inspired town in Delaware, Stapleford settled in Taos in 1998 and built a straw-bale home and sculpture studio, where she currently lives and works. She is a graduate of The University of the Arts in Philadelphia, with a BFA in Ceramics. An avid environmentalist, she has always been fascinated by the infinite diversity of the flora and fauna of our world. Her ceramic art is inspired by architectural ornamentation, the natural world and the human psyche.

“A Nobility of Beasts” began as a clever narration in clay of collective nouns and transformed into an environmental tribute to our animal kingdom. Mandy has created 27 framed sets of clay animals, grouped by their collective noun names, ie; “A Memory of Elephants.” The series is a sculptural exploration of, and homage to, a wee fraction of the incredible animals we share the earth with. It is a show about connection; of animals to animals, animals to people and all of us to the planet. There’s also a little humor sprinkled in for fun. A limited edition, hardcover book accompanies this series. This show represents the only time these pieces will be exhibited together in one place – able to be seen in person and viewed in order as a collective, as they are in the book. This exhibition also includes larger wall-mounted “Beasties” from Mandy’s imagination.

This show is supported in part by the Taos Community Foundation; by the Fulcrum Fund, a grant program of 516 ARTS made possible by the Frederick Hammersley Foundation; by New Mexico Arts, a division of the Department of Cultural Affairs, and by the National Endowment for the Arts.